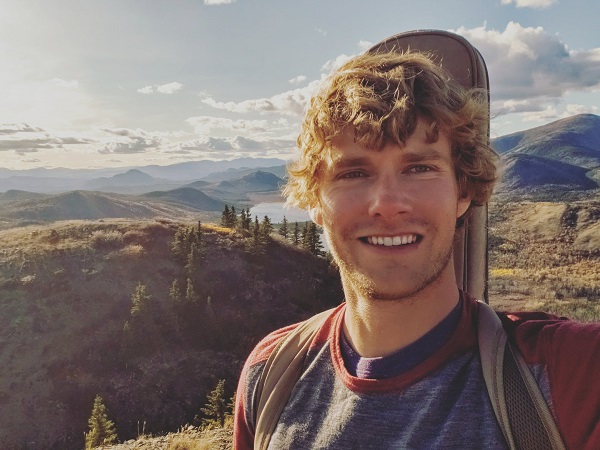 NORTH VANCOUVER, CANADA – Thorin Loeks has seen more of the world than most people will see in their lifetimes. At only age 30, he has bicycled and canoed over 15,000 kilometers across North America with a guitar on his back. He has prospected for gold in the Northern Yukon Territory, backpacked through South America, Thailand, India, and Nepal, cycled more than 6,000 kilometers from the West Coast to the East Coast of North America, canoed 3,800 kilometers down the Mississippi River from Northern Minnesota to the Gulf of Mexico, paddled the Wind River to the Arctic Circle, and then bicycled yet another 6,000 kilometers from Inuvik, Northwest Territories, through his hometown of Whitehorse, Yukon, down the west coast to San Francisco.

It was this most recent journey from northern Canada down the West Coast of America that inspired his new album “In This Place”, 10 songs which feature his signature Indie/Rock/Pop sound. Described as a “West Coast feel that’s very introspective,” the project features Folk-Pop singles like “Open Sky” which has already been released to international success, along with more soothing, lush, ambient songs like “Ice Age” and “With You”, which blend soaring nature inspired acoustics/vocals with a more introspective, intimate, and emotional tone.

“I’ve been songwriting since I was a teenager and there has always been a common theme through my music, which is a sense of hope. Through the journey of being inherently imperfect, something we all share, constantly making mistakes, and navigating the understanding, processing, acceptance of these things within ourselves and with others, I’m a person who is always wanting to grow and evolve as a human. I enjoy seeing people succeed by going through the lifelong exploration, struggle, learning and elation of growing into better versions of ourselves.” Overall, Thorin says his new album, “In This Place”, explores the interplay between nature, human connection, and the inner heart. While unafraid to explore deeper and sometimes darker melancholic emotional spaces, it ultimately is filled with feelings of hope, inspiration, redemption, rejuvenation, and a renewed faith in both the inner and outer worlds of the human spirit – qualities he hopes will resonate with people during these uncertain times. “It’s a combination of connecting with the landscape, communities, and people, but also with oneself,” Thorin said of the music on the album. “The world and our time here can be challenging, painful, and confusing in so many ways, but I am starting to gain a greater understanding of my own journey through life. The meaning, emotional depth, and gratitude I have imbued in this album while drawing upon different genres of music hopefully reflects that.”

In his musical journey, Thorin’s sound has also evolved significantly from his first album, which was fundamentally Indie Folk. While his second album “Shine Through The Dark” introduced a mix of Blues, Rock, and Pop songs to his Indie Folk sound, it is in the seamless, smoother, and more advanced blending of these different genres and elements with his acoustic roots that makes his new album, “In This Place”, really stand out sonically.

Thorin has always had a special connection to nature. He grew up in the Yukon Territory when his family moved there to start a wilderness adventure guiding company. He remembers fondly many experiences with his family and friends – hiking in the wild, canoeing down rivers, and seeing some of the most beautiful landscapes this planet has to offer. As he grew older, he began to bring a guitar with him on his travels, and the music that sprung up from his experiences became the seeds and inspiration for his journeys as a traveling musician.

His signature Indie/Pop sound is the perfect platform for this storyteller who weaves in highly detailed descriptions of the places he’s been while sharing sometimes unbelievable stories of experiences he’s had meeting people from all walks of life and cultures. Working closely with good friend, audio engineer, and co-producer David Tallarico, Thorin has developed an album that truly welcomes listeners into an ambient yet grounded atmosphere of soothing sounds, and emotional/introspective lyrics.

“My music is coming from the heart and soul and a very real place,” Thorin said. “It’s written from personal experiences and inspired by people and places I’ve spent time connecting and communing with. It’s easy for us to get disconnected in this world, and I hope these songs can be a source of authenticity and warmth where people can draw upon them and know they aren’t alone. Over the last three years, I’ve put everything into this album. I’ve really tried to pour as much as I could into every song individually as well as create a cohesive whole. Hopefully, other people will be able to resonate meaningfully with it.”

Thorin recently embarked on another 600 kilometer canoe trip with a friend down the Kluane, Donjek, White, and Yukon Rivers in the Yukon Territory to Dawson City – a trip he says helped him reconnect with his roots. This journey will serve as the background for video footage to go with some of his new songs, so fans can likely expect to see those visuals in the near future.

To listen to Thorin Loeks’ music or to follow him on social media, please visit: